NO MORE POSTS ON THIS BLOG

Google has made it extremely difficult for me to create new posts on this blog.  They need to revert to the old legacy blogger.

Posted by dlevere at 8:47 AM No comments:

Nintendo has discontinued the 3DS

Nintendo has discontinued every model of the 3DS, according to its Japanese website. 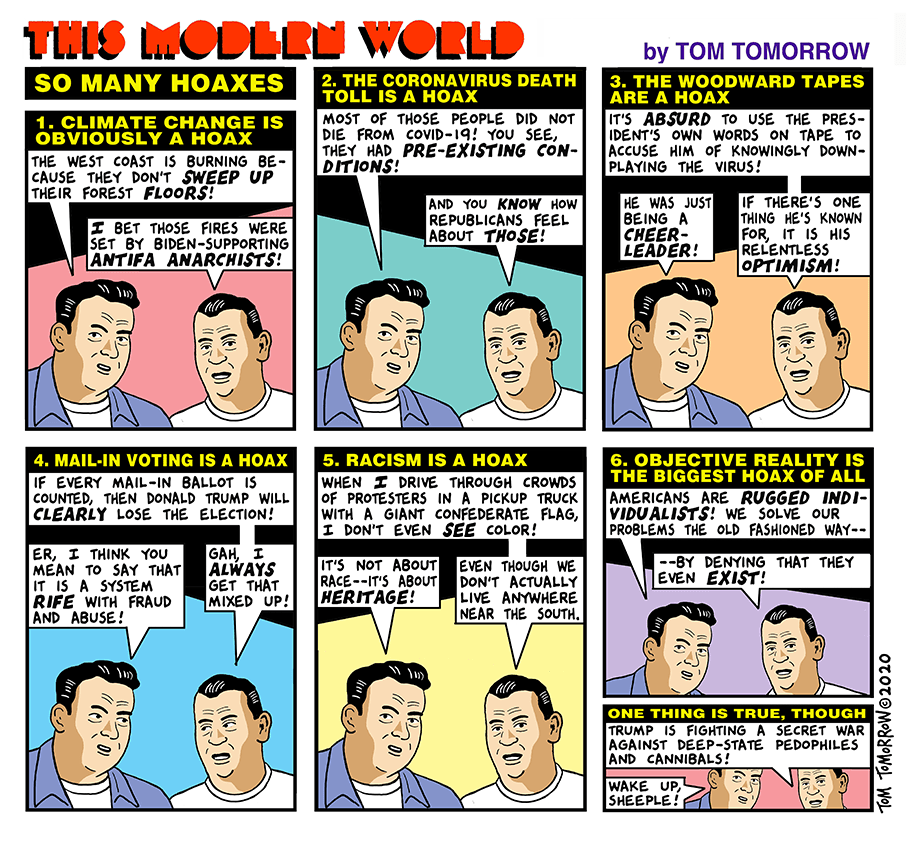 Posted by dlevere at 1:50 PM No comments:

Email ThisBlogThis!Share to TwitterShare to FacebookShare to Pinterest
Labels: Stupidity

Trump is STERILIZING "STAGGERING NUMBERS" Of IMMIGRANT WOMEN In His Brutal Detention Camps!

Jesse Dollemore discusses the explosive story from Vice which reports a “STAGGERING NUMBER OF HYSTERECTOMIES” taking place at a single ICE detention facility AGAINST THE WILL OF THE WOMEN!!!

The Resident Is Our Mass Murderer

Posted by Rude One

Sometimes, oh, my sweet, weary people of Donald Trump's America, it feels like we're sailing in skiffs on a sea of shit and some of us believe we can get across the shit sea to shore and some of us believe that we're gonna sink but we all know we're damned to keep sailing as wave after wave of shit keeps hitting us, and every time we dare to hope that we've seen the worst shit wave, that perhaps we'll get a break and just sail as smoothly as possible through a shit sea, a fucking massive turd wave in a shit storm appears on the horizon and we've gotta batten down the hatches and ride this one out, even though we know that in the best possible circumstances, we'll get over or through but still coated in shit.

What does it change that we now have Trump on audio telling reporter Bob Woodward that he knew back in early February that COVID-19 was airborne and dangerous, far worse, in his own words, than a "strenuous flu"? What does it change that we now can hear Trump say that he downplayed the virus to the public on purpose? In some ways, obviously, it changes nothing. It doesn't bring back the dead. It doesn't rebuild the lives shattered by the shutdown economy. It doesn't really make us understand Trump any more than we already did. We know that he is the motherfuckingest motherfucker anyone has ever met. We know that he was deliberately avoiding action on coronavirus until the mounting death toll and hospitalizations forced him to do something.

But what has changed today is that we know without a doubt that Trump wasn't just spitballing and gambling that the virus wouldn't be bad, despite experts outside of the federal government telling us it would be. He knew. He fucking knew. He knew it and could articulate how dangerous the situation was going to get. And he chose to pretend otherwise and lie to the nation, forcing others to lie, too. After telling Woodward it was worse than the flu, he tweeted the exact opposite, mocking the idea that it's worse than the flu. After telling Woodward that "young people" are susceptible to it, he said that children are "almost immune" to the virus. And no matter how many ways Trump and his ass remoras attempt to spin this as nobly trying not to panic people, there's a fucking world of difference between yelling, "Fire" in a crowded theater and telling everyone to just sit still while the fire burns out.  This is not fine.

Every single person who knew should have spoken. They should have given Trump the finger and told us, including Bob fucking Woodward. Because how the fuck do we trust anything now? Most of us didn't trust Trump, but we thought we could look at others, look at the CDC or Anthony Fauci and find the truth. But they all decided to stay silent, out of either blind or craven loyalty to Trump or the misguided hope they could mitigate the damage by staying quiet, the pathetic error that so many tainted public servants have made.

And now we're supposed to listen when this lying son of a bitch whose face looks like a one-nut pig scrotum and who speaks in barks like a brain-damaged beagle bitch tells us to get an untested vaccine? Fuck off all the way to Moscow.

This is personal, too. I remember wondering all through February and into March whether or not I should wear a mask. I was reading articles about whether or not masks are effective, with many telling us not to worry about it, that the slim supply of masks had to go to health care workers. It gnawed at me until I finally decided, "Fuck it, I'm wearing one" about a week before the CDC changed course and said we should. The thing is that by that point I already had gotten COVID. I didn't get sick until a few days after I started mask-wearing, which means I was doing my part then.

As I've said before, I had very mild symptoms, just a low-grade fever, some fatigue, and a bit of a cough. Sure, it could have been far worse, and I'm pissed at Trump about getting sick. But most of the time, you have the goddamn virus before your symptoms show up. I should have been wearing a mask all along. I don't fucking know who I might have spread it to. And that bullshit weighs on me, and that's on Trump and everyone who stayed quiet.

We knew Trump was busily corrupting every part of the government he could get his shit-stained fingers on. We knew that he was too fucking lazy to really take the action that he needed to take, as simple as that may have been. We knew that we needed to amp up production of masks and gloves and fucking tests. We knew that it was goddamn weird that it didn't happen. We knew that the only thing that matters to Trump is re-election, something that Fauci is quoted as saying in Woodward's book. Fuck, we knew that Trump was actually, actively evil and not just stupidly so. The cockscab wants violence in the streets (which is something that makes his claim of trying to prevent panic utterly laughable).

I'm not really shocked by what we've learned. I'm frankly only shocked that Trump went on the record with it. Which means that he thinks he was right to lie to Americans. He said that today, like he's some fuckin' hero for shutting down the information we needed to save our fucking lives. And by so willingly talking to Woodward, it also means that, even though he should be forced out of office and arrested, Trump believes he will suffer no consequences for his evil. And every single time, that has been proven correct. Even now, when he's killed people in the middle of every avenue, the resident as our mass murderer. And that, dear Americans, is something we haven't seen in a long damn time.

Sometimes it feels like the sails on our skiffs are broken, and so we are just drifting on the shit sea, buffeted by the waves, wondering if we'll float to land before we die of exposure.
Posted by dlevere at 6:40 AM No comments:

The Shape Of Things To Come 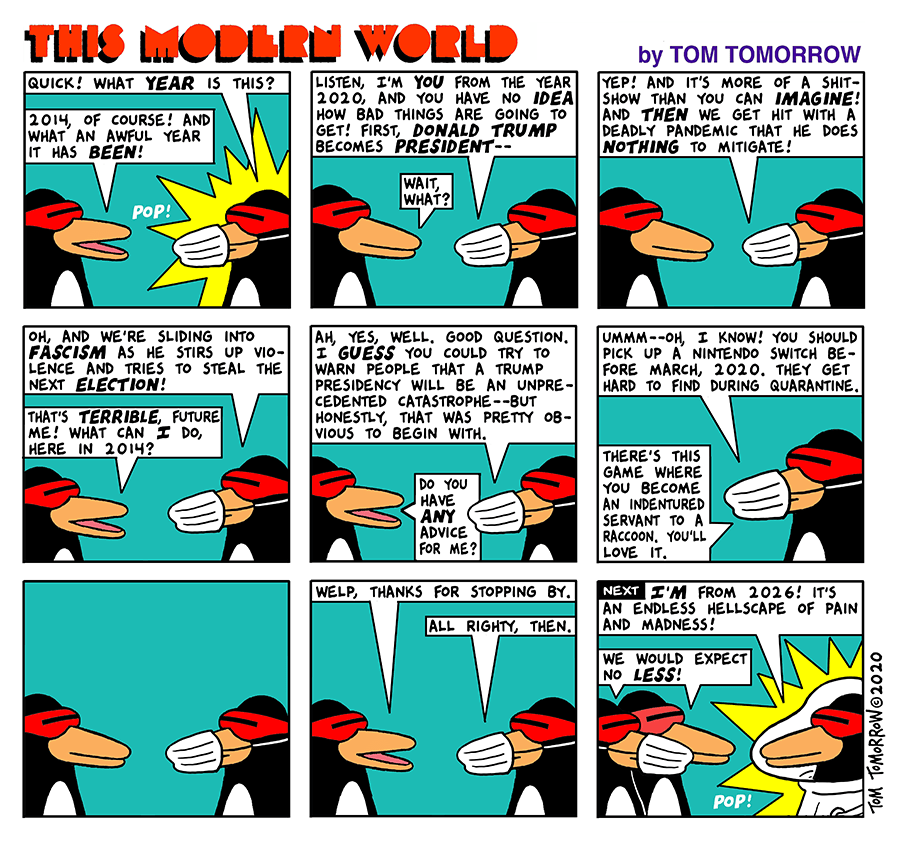 Posted by dlevere at 9:29 AM No comments:

Email ThisBlogThis!Share to TwitterShare to FacebookShare to Pinterest
Labels: WTF

Posted by dlevere at 5:43 PM No comments: 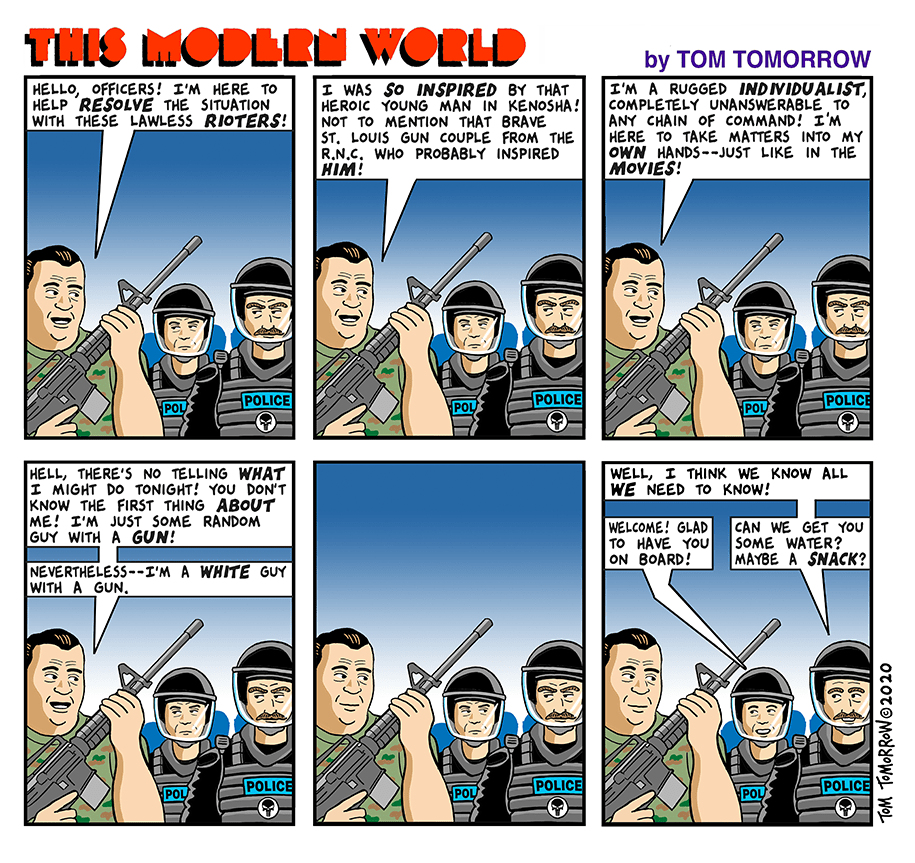 Posted by dlevere at 9:15 AM No comments: